free Inbody assessment
upgrade to premium with these awesome benefits

Reasons Why Kickboxing Classes Are Perfect For Beginners

When wanting to start a new fitness routine and someone suggests kickboxing classes, you might think; “badass”. You would be forgiven for thinking, “as if boxing isn’t difficult enough on its own, we now have to throw in kicking, too?”. On top of which, the phrase kickboxing for beginners might sound like it’s in the league of amateur free-climbing or novice firedancer – doesn’t always end well for most first-timers.

However, do not fret, for that is why we are here; to show you that not only are there benefits to just starting out but that you need not fear kickboxing. Well, unless you somehow end up in a high-stakes fight against Jeanne Claude Van Damme, in which case, remember your training and especially the headband. So, let’s kick a few boxes on the list, 8 of them to be exact.

Rarely will the positive answer to a question be; “punching”, but if you want to know what works the shoulders, biceps, triceps, and chest all at the same time… we think you know this one (that is of course, using a punching-bag not a person). What’s more is with every kick your quads, glutes, hamstrings and definitely, the calves are getting toned. That’s like an 8 for the price of 1 deal.

In almost any form of martial art, it’s the body’s core strength which propels it, which means it needs to come from a solid overall base. In kickboxing, you’re stepping, dodging, punching and well, kicking – all at the same time, which means your core will be hard and your cardio will be fun.

Let’s be honest, one of the main reasons so many of us neglect exercise is because of a lack of proper motivation. For many people, motivation is a team sport. Yes, you could probably hit a ball against a wall for hours on end and call it tennis, but you really do need another human for it to mean something.

Beginner kickboxing classes involve groups of like-minded people who all want to improve themselves – and no, you won’t have to punch or get punched by someone. You could join a women’s kickboxing class, a more senior class or even kickboxing for beginners – whatever environment you’ll feel most comfortable in. You’ll be motivated to keep going while keeping your own pace. As you progress and keep at it, you will also learn to motivate yourself more efficiently.

A battery that charges itself is a pretty handy thing to have, but sometimes you need that initial spark to start the journey.

A 2016 study by 4 Scandinavian scientists monitored 29 instructors and 246 professional cyclists to determine what effect, if any, group settings have on motivation and guidance. They found, among other things, that “Within-group analyses in the intervention arm showed that exercisers’ perceptions of instructor motivationally adaptive strategies, psychological need satisfaction, and intentions to remain in the class increased over time”.

So… in a nutshell, yes. Humans are inherently social creatures, even though we invented Netflix and chill, but sometimes we need net kicks and drills. Kickboxing is such that you need guidance from experienced individuals and groups, so you will definitely not be left in the lurch. Think of it as a kind of built-in GPS, heading to Fit City, population; you. In a kickboxing gym, everyone shares common goals, and everyone will help to achieve them. Like the Ninja Turtles, except, way more than just four members.

“But kickboxing has both the words kick and boxing in it, how will I not injure myself?”

A valid question. Like we mentioned earlier, you won’t even have to kick or box a machine until you are ready. This isn’t Fight Club, so we can talk about it. Most beginner injuries happen when you’re pushing one area or muscle group too far ‘cause you don’t know the limits yet. With kickboxing it’s a holistic approach, meaning you get to gradually work on your whole body from the start, allowing you and your instructors to focus on form and basics before you get too deep.

Just don’t get in a feud with a rival dojo and you should be fine.

Again, we’re not advocating for random outbursts of punching, but if this article was a list of “Ways To Relieve Stress Quickly and Harmlessly”, then “Punching A Bag In A Gym” would be right up there. Now imagine how stress-relieving it would be to both punch and kick a bag. Science tells us that our brains signal the release of cortisol in our bodies via the adrenal glands when we endure stress, which affects our body’s metabolism. Unfortunately though, not in a, “maybe it’s one of those double-negative side effects that end up having an overall good effect?” kind of way.

Getting into a positive new routine is also one of the most fun ways you can fight off any lingering stress or guilt, and kickboxing has a structure that allows you to focus in on that practice. So, in another rare instance, punching and kicking is a win-win situation.

Even though they’re called punching bags, you won’t ever actually be punched or kicked by one. The other upside of this is that it makes training kickboxing something where you can immediately see improvements and areas to work on. Not to mention, you’ll be surrounded by people who are there to do the same thing. Which means you can share to your new buddies how badass it feels to slowly become a more badass version of yourself.

Everyone was a beginner at some stage, and there’s no greater confidence booster than sharing and being praised for your accomplishments. Especially if your accomplishments are as cool as being able to say to yourself “I’m getting better at this kickboxing thing”.

The classes are fun, seriously

Sitting in traffic is about as fun as being a human punching bag, but most times you have to do it to get where you want to go. Exercise can feel like a Herculean effort akin to a Monday morning on the highway, but if every time you drove to work you got a boost of serotonin, dopamine, adrenaline, and camaraderie it sure would be a lot easier. Luckily, such is the case with something like kickboxing.

When you learn something new, your brain associates it with the experience, and first impressions do count for our brains. It’s engaging and accessible, so associating the fun of the learning process with the exercise you’re doing will go a long way in preparing for an epic journey. Your brain will fuse having a good time, with getting fit. Plus you’ll learn some sick new moves.

It’s no contact (no hitting of or getting hit by machines or people).

Ways in which beginning kickboxing training is like a calm walk in the wilderness – number one; it’s no contact with machines or people, meaning in your kickboxing workout you need not worry about using your newfound powers of badassery on another human. Needless to say, kicking and punching are staples of most martial arts, and as with self-defense, is where kickboxing gets its techniques from.

It’s no good in being able to both kick and box if you need to if you can’t also protect yourself. This means that self-defense is inherent in kickboxing, helping create muscle memory and reflexes that are more than just swinging a fist real fast. You’ll be relying on your body, so don’t worry about a foot to the face any time soon. Also, there are the badass moves.

Whether you want to chill out, bulk up, buckle down or kick up a storm – you need not worry that kickboxing for beginners is a daunting task. Even if you’re a stranger to a kickboxing gym or exercise, there is a place for you in beginner kickboxing. We promise you won’t be estranged for long. There are many different ways in which people utilise, and benefit from kickboxing training, so if you want to know more or would like to talk specifics with us, don’t hesitate to get in contact (and by contact, we don’t necessarily mean punch). You can also use our class finder tool to explore the classes we have available and how they align with your goals.

Want to join in for just a day? Train in our world-class facility! Pop your details in the form below and a member of staff will contact you.

Sign up to awesomeness! Get our newsletter with everything from workout playlists, healthy recipes, wellness articles and Viva news. 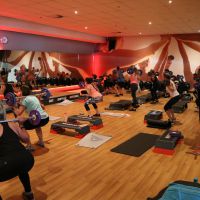 Recently we chatted with Fabian from Viva Gym Walmer. Hear what he had to say when we did a Q&A with him:   “Hello, I’m Fabian, the Fitness Manager at Viva Gym SA Walmer. People would describe me as a funny guy, always trying to put a smile on someone’s face or a laugh in […] 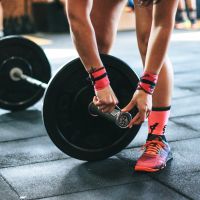 The stereotype of a bodybuilder is more often than not a mountain of a man curling a hugely heavy barbell slowly and determinedly. The notion is that doing barbell exercises is synonymous with muscle building, and will get a person ‘swole’, as they say. While there’s no denying that you need barbells and other weights […]

HIIT’ing It Off: Benefits of High-Intensity Interval Training

Just hype or genuine hit (lols)? Many people struggle to find the time for exercise but with high-intensity interval training, it’s about maximum effort in a short space time. In this article, we’ll break down the trend that is HIIT and why it’s still one of our favourites and worth a go if if you havn’e […]

happy and healthy together

Bring your family to your nearest Viva Gym when you sign up on a 12 month contract.

*must all have photo ID with them.

If you would like a friendly member of staff to call you back, please fill in this form: Get our NEWSLETTER
with everything from
FREE downloadable workouts, health and wellness tips and
the latest Viva news.